Hamilton School Board members took their first official look at the 2016-17 budget at their regular meeting. The budget totals $54.05 million, which is 3.33 percent less than the current budget. The decrease occurred because in 2015-16 the district’s expenses included use of fund balance revenue beyond the operational budget to pay for a 10-classroom addition at the high school.

The budget was created with the assumptions that student enrollment will drop 25 students and property value will be flat, something Business Services Assistant Superintendent described as worst-case scenarios. State aid will increase $100 per pupil. Debt service is down 3.89 percent as projects constructed in the late 1990s and early 2000s drop from the district’s debt schedule. The budget includes two additional full-time equivalency contingency positions to handle potential enrollment increases in certain classes and instructional coaching for staff and one custodial position for outside projects and 10 additional high school classrooms.

The tax rate is projected to be $9.57 per $1,000 of equalized property value – 0.41 percent less than the current rate. For each $100,000 of property owned, citizens will pay $957 to support local school taxes which is $4 less than this year’s rate. If student enrollment and property value are greater than the conservative assumptions made in the budget, the tax rate will be lower.

The School Board set the Annual Meeting for June 20 when residents will be able to vote on the levy. The meeting begins at 7:30 p.m. in the Hamilton Fine Arts Center. It is preceded by the Annual Public Hearing which begins at 6:15 p.m. 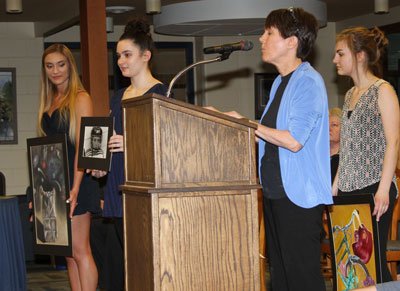 Three Hamilton High School art students who earned awards in the 2016 Scholastic Art Awards were recognized for their success in the statewide contest. Hamilton art teacher Ellen Acuff spoke to the board about the artwork that her students created. Students who earned awards and were recognized at the School Board meeting were: Emily Bader, Mia Rogers and Vanessa Winter. Alexis Fellenz and Emily Hentzell were not able to attend the meeting. 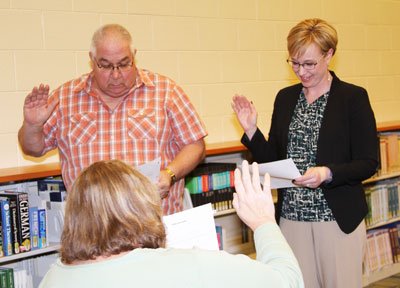 Jennifer Waltz and Gabe Kolesari were sworn in as School Board members. Kolesari is a long-time board member, but Waltz is a newcomer to the board who was elected for the first time April 5. She replaces Gerald Schmitz who chose not to run after serving the School Board for 40 years.

“Mr. Otto is an outstanding educator whose focus on collaboration, communication and relationship-building will be an asset to our school,” said Hamilton Principal Candis Mongan. “We look forward to having him join the Hamilton team.”

In other personnel business, the School Board accepted the resignations of Templeton Title I paraprofessional Jessica Splittgerber, effective April 22, and Hamilton applied engineering and technology teacher Christopher Kersten, effective at the end of the school year.