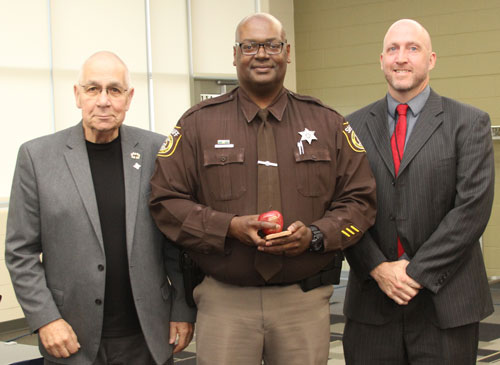 The Hamilton School District presented the Waukesha County Sheriff’s Deputy and School Resource Officer Gary Kelly with its 2019 Community Service Award at the May 20 School Board meeting. Public Information Coordinator Denise Dorn Lindberg said Kelly was most deserving of the award because of his tireless efforts to keep schools safe.

“His demeanor with students was not as a disciplinarian, but as a trusting adult who wanted to keep our school safe,” Lindberg said.

Kelly became the district resource officer in 2012. He is leaving that post at the end of the school year to take on other responsibilities in the sheriff’s department.

The Hamilton School Board accepted the retirement request of Assistant Superintendent for Business Services Bryan Ruud at its May 20 meeting and appointed the district’s comptroller, Shelli Reilly, as his replacement effective Jan. 1, 2020.

Hamilton Superintendent Paul Mielke, Ph.D., said the Hamilton School District was fortunate to have Ruud as a leader for the past 26 years.

“Mr. Ruud’s fiscal stewardship has helped the Hamilton School District provide an excellent educational program for students while maintaining low per-pupil spending,” Mielke said. “His sound management led to an upgrade in our Moody’s Investor Services rating which is one of the highest among Wisconsin school districts.”

Ruud joined the district in 1993 as the buildings and grounds manager. He became business director in 2000 and assistant superintendent in 2007.

Final budget approved to be presented at Annual Meeting

The Hamilton School Board gave its approval for the 2019-20 budget that will be presented to voters at the Annual Meeting.

The budget totals $60.5 million, which is a 6.38 percent increase over the current budget. It assumes property value will increase 2.5 percent and state aid will increase 4.07 percent.

The tax rate is projected to be $9.10 per $1,000 of equalized property value – 18 cents more than the current rate. For each $100,000 of property owned, citizens will pay $910 to support local school taxes which is $18 more than this year’s rate. If student enrollment and property value are greater than the conservative assumptions made in the budget, the tax rate will be lower.

Public Information and Volunteer Program Coordinator Denise Dorn Lindberg and Jen Galang updated the School Board on the Seniors & Students Program, a volunteer program designed to recruit, train and place senior citizen volunteers age 55 and older in the district. More than 250 senior volunteers serve throughout the district. Nearly 30,000 volunteer hours have been logged since the program began 21 years ago – a value of more than $2.7 million.

The program saw substantial increases in the number of volunteers, activities and hours of service. Readers’ Café, tutoring, Pen Pals and the Greatest Generation oral history project have continued and volunteers were offered a new opportunity to participate in Templeton Middle School’s intergenerational book discussions.

The district received 143 applications from nonresident students to attend Hamilton schools under Open Enrollment. No spaces are available in the district, so applicants will be placed on a waiting list for the 2019-20 school year. The district will monitor expected enrollment throughout the summer to determine if students will be recommended for placement at schools based on space availability. 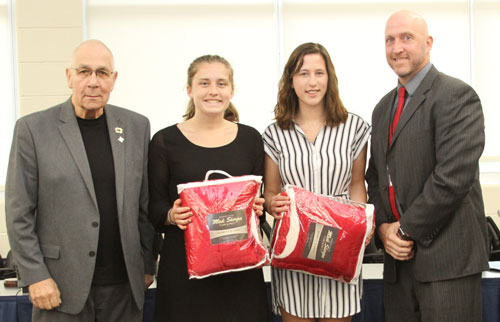 School Board President Gabe Kolesari (left) and Superintendent Paul Mielke, Ph.D., (right) recognized Hamilton High School students (from left) Haley Pifher and Mikayla Cup for their service to the School Board as the student representatives during the 2018-19 school year. (Not pictured is student Hannah Wenger.)