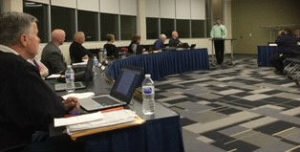 Sandi Blackwell and Jamie Schounard, members of the committee, presented the recommendations that corresponded with the latest results from community, parent and employee surveys in which a majority of respondents supported the district’s proposal to increase property taxes for added classrooms to address increasing enrollments and update the high school Applied Engineering and Technology (AET) Program.

The 50-member CFAC began meeting last January to study issues related to housing growth in the community, its impact on school enrollment and the capacity of schools to serve more students. During its study, CFAC concluded that:

In March committee members presented an interim report in which they recommended that the School Board delay a referendum decision until after another survey could be conducted. Surveys conducted last February indicated many community members and parents were not aware of the pressing need for classrooms districtwide. The committee endorsed reaching out to the community with information about the impact of growth on the schools.

After community outreach, surveys were conducted in October that revealed levels of support increased 5.7 percent (52 to 57.7) among community members and 16.1 percent (57 to 73.1) among parents. Employee support was overwhelmingly high (85+ percent) in both February and October surveys.

After reviewing October survey results, CFAC recommended that the district hold a referendum on the Feb. 20 primary election with two questions. One question would be for $57.4 million of facilities projects that includes:

Hyland said he was voting against the committee’s recommendation because he disagreed with having all three facilities projects in one question and wanted voters to be able to choose which projects to approve.

In her presentation, Blackwell said the committee felt the proposal only worked as a package. The Applied Engineering and Technology (AET) project takes three existing classrooms to expand the area. The high school already has nine teachers working from carts who do not have dedicated classrooms. Approval of the AET renovation without the other classroom addition project would create a greater classroom shortage at the high school.

School Board member Deborah Briggs said dividing the questions would be confusing and people may simply vote for the least expensive project “without looking at the big picture.”

The second question would be for $1.5 million of reoccurring operational costs to operate the new intermediate school. While increased enrollment brings in additional state aid that pays for new teachers, additional costs of a new school are not covered. The referendum’s operational costs would fund utilities, insurance, custodians, paraprofessionals, administration, guidance counselor, psychologist, social worker, office staff and health room.

Student Assistance Program and AODA Coordinator Kristin Hasbrook presented an annual report to School Board members about efforts to keep students from getting involved in alcohol and other drugs. Providing initial screening and AODA referral services, helping families find appropriate community services and conducting activities in the schools comprised 2016-17 activities.

School administrators calculated that the district will not have enough classroom space to take additional Open Enrollment students for the 2018-19 school year due to projected resident enrollment. Open Enrollment is a statewide program that allows students to attend public schools outside of their districts if space is available.

The schedule for the 2018 spring election was released. Terms are up for School Board members Dawn Van Aacken, who holds the Lisbon seat, Deborah Briggs, who is in the Butler seat, and Brian Schneider, who holds the Menomonee Falls seat.