Board accepts FAC interim report, will resurvey after informing community

After studying issues related to housing growth in the community, its impact on future enrollment and the capacity of school buildings to serve more students, the 50-member Facilities Advisory Committee (FAC) recommended that the School Board delay a referendum decision for a few months.

Three members of the committee – Jennifer Barnish, Jamie Schounard and Peggy Youngblood – and Human Resources Director John Roubik presented the awaited report. Because many respondents of a community survey were not aware of district facilities needs and potential solutions, the committee recommended that the district provide information to the community and resurvey the community later this spring.

During its study, the committee concluded that:

The committee reviewed a list of 13 potential facilities options to address projected growth and update high school programming. After several meetings, the committee narrowed the list to $57.4 million of new or renovated facilities and $1.5 million in annual operational costs that included:

Once the level of community support for a potential referendum has been determined based on the results from information outreach and a second community survey, FAC will present a final recommendation to the School Board for consideration at a future meeting.

Woodside in the spotlight

Several students and teachers described programs and efforts that Woodside Elementary School has worked on to benefit others and their school.

In addition to the service projects, Woodside has continued making academic progress with its tactical goals of reading and mathematics achievement. 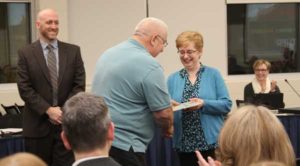 The School Board recognized Woodside music teacher Heather Cheslock who was presented with Civic Music’s Certificate of Excellence in General Music Instruction. Cheslock was honored along with five other Milwaukee area teachers at the Milwaukee Symphony Orchestra’s “Salute to Educators” concert at the Marcus Center for the Performing Arts.

Girl Scouts learn about School Board for government patch 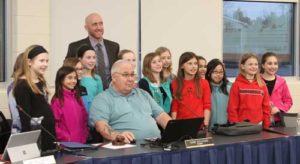 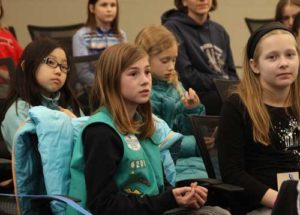 Members of Marcy Elementary School’s Girl Scout troop attended a School Board meeting and met with Superintendent Paul Mielke and School Board President Gabe Kolesari before the meeting to earn a government patch. The troop also was invited to lead “The Pledge of Allegiance” to start the meeting.