Two Templeton Middle School Junior Robotics teams wrapped up successful seasons at regional, sectional and state competitions. Both Team 5396, Radioactive Pyros v.2 and Team 5395, Computer Aided Super Team (C.A.S.T.) competed in the First Lego League Marquette Regional. C.A.S.T. won the Core Values Gracious Professionalism Award and placed 22nd in the robot games. The Radioactive Pyros v.2 won the Innovative Solution Award and placed 13th which qualified them to advance to the Waukesha Sectional. It is the first time in Templeton history that both teams won awards at a competition.

The Radioactive Pyros v.2 placed in the top five at the Waukesha Sectional and qualified to advance to the State Championship Feb. 26 in Janesville. At the sectional, the team won the second place Innovation Solution Award and was nominated for the Champions Award. It is the first time in team history that a Templeton team advanced to sectionals and the Wisconsin State FLL Championship.

With the theme of “Animal Allies,” teams were challenged to determine ways to improve interaction between humans and animals. Teams completed a research project based on the challenge and built an autonomous robot using LEGO MINDSTORMS technology to solve a set of missions in the robot games.

The Radioactive Pyros v.2 determined that obesity in pets is the number one health problem for pets in America. The team created a digital 3-in-1 pet feeding system called “The SmartFeed.” The system includes a digital app-based feeder that dispenses proper amounts of food, water and medication daily and uses a camera to monitor pets feeding habits.

C.A.S.T. developed a drone that helps park rangers target and capture poachers. The proposed drone would reduce animal and human interaction which in this case improves the interaction. 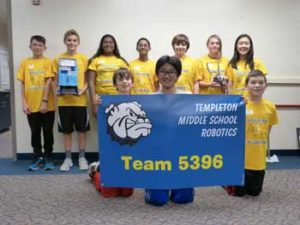 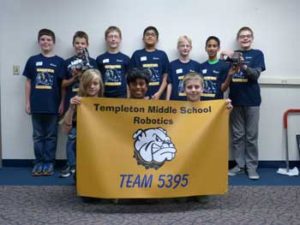