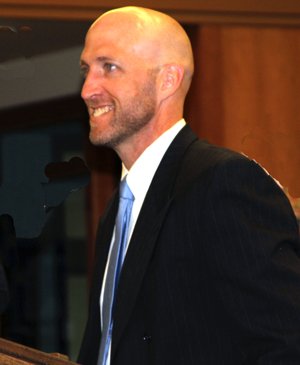 Hamilton School Board members approved the appointment of five employees including the new Templeton Middle School principal. Paul Mielke, Ph.D., who has been principal at West Allis Central High School since 2009, begins his new leadership role in the district July 1. Previously he was assistant principal and athletic director at Waukesha South High School. He started his career in education as an English teacher at Wittenberg-Birnamwood High School. He earned his doctorate and master’s degrees in educational leadership from Cardinal Stritch University in 2012 and 2005, respectively, and his bachelor’s degree in English and history from the University of Wisconsin – Oshkosh in 1999.

Other staff members who were appointed were:

School Board member Gerald Schmitz and board president Gabe Kolesari reported on the sessions they attended at the 2014 National School Boards Association Convention.

In the district administrator’s report to the School Board, Superintendent Kathleen Cooke, Ph.D., noted that Marcy school psychologist Mary Wimmer authored a book, “Evidence-Based Practices in School Refusal and Truancy ,” that was published by the National Association of School Psychologists.