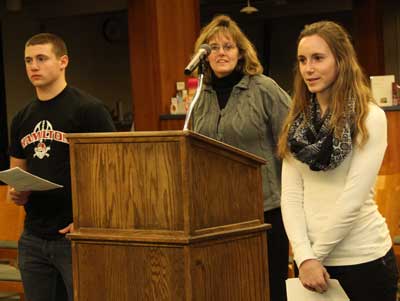 Two of her former students helped Hamilton mathematics teacher Kelly Meyer give School Board members a glimpse of life in a “flipped classroom.” Meyer taught a precalculus class in which students watched videos of her presenting lessons before coming to class. They then engaged in activities during class time. The instructional model is considered flipped because students watch the lecture or presentation alone at home, and then practice what they learn in the classroom where they can get support from the teacher if they have trouble applying the concepts.

Seniors Corey Parris and Holly Heckendorf, students in Hamilton’s first flipped classroom last semester, said they benefitted from the class structure that allowed them to move ahead or catch up on class content as necessary.

Meyer said the flipped class allowed her to better understand what students knew and provide more personalized instruction. She said that while teaching traditional classes, students often would tell her they thought they understood the concepts in class, but when they went home and worked on problems they were confused and frustrated.

Meyer said it makes sense to have the teacher near to answer questions and reteach when students need it most.

District to move to Teachers On Call for subs

The Hamilton School District will use an automated process to secure substitute teachers and paraprofessionals for classrooms when regular staff are out. School Board members authorized administrators to sign a contract with Teachers on Call (TOC) to provide substitute staffing services for the 2013-14 and 2014-15 school years.

Hamilton’s current system employs a paraprofessional to dispatch substitutes via phone each day from a pool of about 80 who fill in as needed throughout the year. The new system will provide access to the district’s current substitutes as well as a larger pool of staff from southeastern Wisconsin.

TOC substitute teaching staff will be paid the same daily rate the district offers and will be eligible for an enhanced compensation package not offered through the district including paid holidays, bonus structure for worked hours, insurance plans, individual retirement accounts and a weekly pay cycle.

TOC will train school employees and substitute staff in using the automated system. Classroom teachers will be able to use TOC technology to request a substitute and post lesson plans online so that substitutes can review them before taking their assignments. In addition, absence data for most employees will be managed through the TOC system.

Despite providing additional services to the district and offering substitutes benefits, school administrators are not expecting costs to increase. Because TOC operates in many southeastern school districts, its economy-of-scale allows for greater operational efficiencies than a single school district could produce. The paraprofessional who previously handled substitute calling will be offered a new assignment in the district.

School Board members approved Hamilton High School’s continued participation in a hockey cooperative program through 2015. New this year will the addition of Kewaskum to the participating high schools that include Hamilton, Menomonee Falls , Germantown, Hartford, West Bend East and West and Slinger. The cooperative program is funded by members of the team and has no financial impact to the school districts.

Instructional Services Supervisor Katherine Little, Ph.D., reported on the curricular areas that are under revision including:

In personnel business, the School Board appointed Lisa Timpone-Lauters as a Special Service Office administrative assistant.