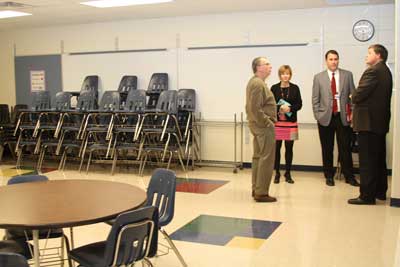 Hamilton School Board members approved leasing 700 laptops for four years to meet the demands of preparing students to be college and career ready. The new technology also will get students used to being assessed in an online environment, which the state’s new Smarter Balanced Assessments will require.

Cost for the four-year lease of the laptops will be $399,026, which will come from the district’s technology equipment budget.  At an additional cost of $112,719, the district will own 47 mobile carts that house 15 computers each when the lease is up.

Information Technology Manager Ryan McMillan said the computer labs in the district are booked solid during the school day. Having the laptops available on mobile carts that can be wheeled into classrooms as needed will make technology more accessibility for students and staff.

Breakdown of laptop distribution by school is: 150 each at Hamilton High School and Templeton Middle School, 135 at Woodside, 120 at Marcy, 75 at Lannon, 60 at Maple and 10 spare machines.

School Board member Michael Hyland said he appreciated the IT Department’s work on securing a lease agreement at a reasonable cost, but he was uncomfortable voting in favor of the plan because it represents another unfunded mandate from the state. The state will implement its new Smarter Balanced Assessments in 2014-15 and will require them to be taken online.

“This is another item in our budget that is an expense that we are picking up,” Hyland said during the Buildings & Ground and Finance Committee meeting earlier in the evening.

He said people at the state are making decisions for local school districts, but they don’t have any money invested in it.

“I feel we are doing too much testing and it means teachers are spending less time with students in the classroom,” Hyland said.

At the committee meeting, School Board member Deborah Briggs said she agreed that testing is overemphasized, but she saw greater access to technology as benefiting student learning.

“Part of the reason we are doing this is because of testing, but the requirement for kids is to be proficient and able to use technology in all areas,” Briggs said.

School Board member Gerald Schmitz said while some of the impetus for getting more computers came from state requirements for future online assessments, he believes the technology will be used for learning.

“It’s really the students who will gain in the long run,” Schmitz said.

The additional computers will take the district’s computer-student ration from 5:1 to 3:1.

Two parents spoke during the public comments of the meeting. They asked the board to consider changing the way grade point averages are determined so that the grade earned in high school mathematics classes taken by accelerated eighth-graders do not affect class rank. The issue was not on the agenda and the School Board could not discuss at the meeting.

Marcy addition gets board member review

Members of the Buildings & Ground Committee toured the completed construction project at Marcy Elementary School. Students and staff took full occupancy of the addition when classes resumed after winter break. The portion of the project that added six new classrooms and restrooms is complete, but when school lets out in June, two existing classrooms will be turned into a large group area, completing the $2 million project. The district did not go to referendum for project, but instead used its operational budget over two years to cover costs.