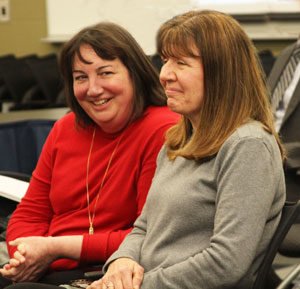 Marcy Elementary School Principal Michele Trawicki and Associate Principal Katie Ritchie took advantage of the school’s video news program to pay tribute to two paraprofessionals. A special edition of the Marcy Eagle News, which students normally see in their classrooms on Tuesdays and Fridays, was created to honor paraprofessionals Mary Coady and Cheryl Leiden. The two stepped in this year to supervise the student-produced show after previous adviser, former library-media specialist Wendy Horsens, took a different teaching position at school.

In their on-air performance, Trawicki and Ritchie described the roles and responsibilities Coady and Leiden assumed. The program contained numerous testimonials and expressions of appreciation from fifth-grade students who worked with the pair to write and produce the show.

In addition to honoring Coady and Leiden, the School Board learned about the impact of adding a half-time administrative position at Marcy. After teaching for 10 years at Marcy, Ritchie became the associate principal at the start of the school year. She described her varied roles at school, notably as a staff member who can take over a classroom giving teachers the opportunity to observe effective instructional techniques of their colleagues.

In special education business, the School Board authorized district staff to once again contract with the Elmbrook School District special education services in the 2017-18 school year. The contract will provide low-incidence disabilities services for students who have autism, intellectual, hearing and vision disabilities and for the placement of one student at Fairview South, a school that serves students with cognitive disabilities. Hamilton is one of 26 school districts that contracts with Elmbrook for services. Districts reimburse Elmbrook based on usage of services.

Enrollment up 31 students since start of school

Student enrollment since the beginning of the school year has increased by 31 students districtwide, according to a report from Human Resources and Organizational Development Director John Roubik. The additional students are dispersed throughout schools and grade levels districtwide.