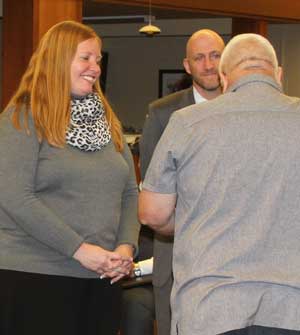 School Board members decided to secure the services of an outside consultant to help them in the superintendent search process. It was one of three options they considered which also included hiring a national search firm which could cost up to $25,000 or conduct the search on their own for little outside expenses but relying on district staff to assist with clerical responsibilities. The option they chose is expected to cost $7,000-10,000.

Superintendent Kathleen Cooke, Ph.D., announced her retirement Dec. 1, effective at the end of the school year.

Templeton Middle School teacher Rhonda Watton was recognized for being the 2015 Wisconsin recipient of the James Madison Memorial Fellowship. Named in honor of the fourth U.S. president, James Madison fellowships support American history graduate study by aspiring and experienced secondary school teachers.
Watton, a Templeton social studies teacher since 1998, was selected among applicants from each of the 50 states, District of Columbia, Puerto Rico and U.S. territories. The award recognizes promising and distinguished teachers to strengthen their knowledge and understanding of American constitutional government. Its aim is to expose American students to accurate knowledge of the nation’s constitutional heritage. James Madison fellowships fund up to $24,000 towards a master’s degree with a concentration in history and U.S. Constitution principles.

Enrollment up 23 students since start of school

Because student enrollment is tapering off and revenue caps set by the state are not keeping up with the rate of inflation, the district will have to find ways to trim its budget once again. As schools begin the budget process for the 2016-17 school year, they will do so with the following parameters:

These parameters will result in an overall 12.2 percent per-pupil allocation and are based on anticipated revenues and expenses. As much will need to be carved from department budgets as well, according to Business Services Assistant Superintendent Bryan Ruud.

2016-17 school year classes will begin September 1 and end June 9 for students in the Hamilton School District. The 2016-17 school calendar was approved with a similar format and parameters as the one used this year. The calendar will continue to have:

The main difference from the current calendar is that instead of having parent-teacher conferences the day before Thanksgiving, the conferences will be held in the evening on another day.

Board member Brian Schneider voted against the calendar because he said he did not like having half days.

School Board members gave administrators authority to work with the web development firm, Orion Group of Sussex. The district’s current website was created eight years ago and is hosted internally on district servers which require Information Technology support and maintenance. Moving to secure off-site servers is preferred. In addition, the district seeks greater functionality of the website and a responsive design that is fully functional on any mobile device without compromise.

Seven web design firms provided proposals to develop and host a new website for the district with costs ranging from $15,035 to more than $79,000. Administrators were given the OK to develop a contract with Orion which provided the lowest cost estimate. The Public Information Office and Information Technology staff will work with Orion to develop the new site in the coming months.