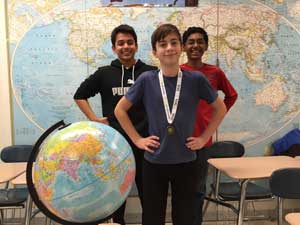 All Templeton students participated in a preliminary round by taking a 25-question written test. Students who scored highest on that test advanced to the semi-final round and the eight finalists took part in the final championship round Jan. 19.

As the school champion, Hutchinson will take a written test to qualify for state level competition. Up to 100 of the top scorers in each state will be eligible to compete April 1 in state level National Geographic Bee events. The winner of each state bee will travel to Washington, D.C., in May to participate in the national event.