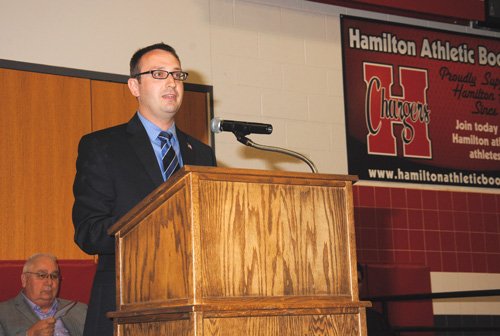 Graduate Joseph Semrad was presented with the 2015 Hamilton High School Distinguished Alumnus Award at the school’s June 13 graduation ceremonies. A 2004 graduate, Semrad works for the U.S. Department of State where he has served tours in Leipzig, Germany, Bangkok, Thailand and more recently in Washington, D.C. As a protocol officer in the Office of the Chief of Protocol, Semrad provides operational, logistical and cultural support to the president, vice president and secretary of state in conjunction with their travel abroad and meetings with foreign dignitaries.

While a student at Hamilton, Semrad spent his senior year abroad in Germany as recipient of the Congress-Bundestag Exchange Scholarship. Following high school, he received his bachelor’s degree in political science and German linguistics from the University of Wisconsin-Madison. During his undergraduate studies, he returned to Germany for a second year to study at the Freie Universität in Berlin while working as a legislative assistant for a member of the German Parliament. After graduation, Semrad joined the Peace Corps where he served for two years in rural Ukraine teaching middle and high school English. He later went on to receive his master’s degree in public administration from American University in Washington, D.C.