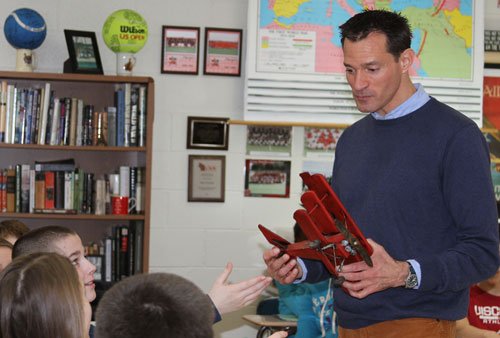 Templeton Middle School teacher Alan Schneider was awarded the Distinguished Middle School Teacher of the Year by the Wisconsin Council for the Social Studies (WCSS) March 17 at its annual conference in Middleton. In his 18th year of teaching Templeton seventh-graders, Schneider strives to make the story of our past exciting, engaging and relevant using simulations, re-enactment and hands-on activities.

Schneider’s students have learned about history from Holocaust survivors and local World War II veterans who directly share their experiences. The last dancing B-29’er, Henry Ratensky, has spoken to students about missions over Japan, and then teaches students how to swing dance.

Schneider regularly integrates technology such as Google Earth, iPad walking tours and Skype as he brings the world into his classroom and makes the voices of the past come alive. He has traveled extensively with students throughout Europe and the U.S. and has organized and led to trips with local war vets and students. Schneider also serves as a delegation leader with the People to People Student Ambassador Program. He is advisor for Templeton’s Ski & Board Club and has led the annual school trip to Colorado for the last 14 years.

Schneider has served as social studies department head and is active in the district’s curriculum revision and critical thinking development. Since 2001, he has played a key role in his school’s Veteran’s Day program. Outside of school, he has presented at Geo Fest on behalf of the Wisconsin Geographic Alliance. Schneider received his bachelor’s degree from Marquette University with a major in European history and his master’s degree in educational leadership from Cardinal Stritch University.