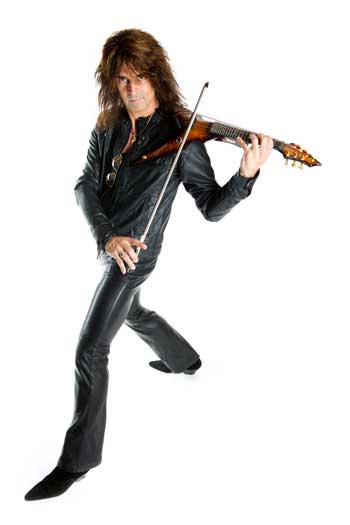 Not only is Mark Wood an Emmy-award winning composer and string master, he has collaborated with and appeared alongside some the biggest names in music including Lenny Kravitz, Celine Dion and Kanye West. As a member of his touring band, Wood performed with the legendary Billy Joel for both historic final concerts at Shea Stadium, sharing the stage with Paul McCartney, Steven Tyler and Roger Daltry.

Wood has appeared on the world’s most venerable stages including Carnegie Hall, Lincoln Center and Madison Square Garden, and he now performs with our very own Hamilton High School band and choir.

The musical selections are surprising and include Wood’s own compositions and arrangements of classic rock and contemporary music such as Tina Turner’s “River Deep Mountain High,” the Beatles’ “A Little Help from My Friends,” Ozzy Osbourne’s “Crazy Train,” Led Zeppelin’s “Stairway To Heaven,” and the Rolling Stones’ “You Can’t Always Get What You Want.”

This collaboration is generously sponsored by the Hamilton Education Foundation, whose mission is to enhance, extend and enrich learning opportunities for Hamilton School District students. The event is supported by in-kind donations from the Milwaukee Marriott West Hotel and Proline Entertainment, LLC.

General seating tickets are $20; add $5 at the door. They may be purchased online at www.HamiltonFineArtsCenter.com or by visiting the HFAC box office on Wednesdays from 2 p.m. – 6 p.m. Tickets also may be purchased by contacting Hamilton Band Booster President Michael Sendelbach at michael.w.sendelbach@jci.com and will support the band program.  No phone orders accepted, please.

Other upcoming events at the HFAC

The HFAC will present other national headliners and top-notch entertainment throughout the year, including:

Lorna Luft celebrates her mother, Judy Garland, in “Songs My Mother Taught Me” with the Menomonee Falls Symphony Orchestra – May 11 at 7:30 p.m.

Lorna Luft celebrates her mother, Judy Garland, in this very special Mother’s Day concert performed with the Menomonee Falls Symphony Orchestra. Born to legendary entertainer Judy Garland and producer Sid Luft, Lorna Luft is a celebrated live performer, stage, film and television actress, best-selling author, recording artist and Emmy-nominated producer. One of her most ambitious projects to date is this highly acclaimed multi-media production. This theatrical extravaganza melds one of the world’s most familiar songbooks with personal memories from a loving daughter. Generous in-kind support provided by the Milwaukee Marriott West Hotel and Proline Entertainment, LLC. General seating tickets are $25 adults, $20 seniors (60 years and older) and $10 students (18 years and younger).

Brookfield Academy presents “Annie Get Your Gun” – March 8 and 9 at 6:30 p.m., March 9 and 10 at 2 p.m.
Performed by Brookfield Academy, this wild west show-within-a-show tells the ageless love story of the sharpest sharpshooter, Annie Oakley, and the heart-throb of Buffalo Bill’s traveling show, Frank Butler. Hum along to unforgettable tunes like “There’s No Business Like Show Business,” “I Got The Sun in the Morning” and “Anything You Can Do I Can Do Better.” Enjoy a dazzling score and laugh-a-minute fun that delights audiences young and old. Reserved seating tickets are $15 adults, $10 seniors and $5 students.