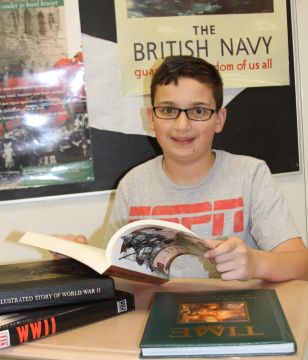 Templeton Middle School seventh-grader Dominic Pino is headed to Washington, D.C., May 12 after winning the regional championship of the National History Bee.

Pino and Sean Durian advanced to regional competition March 15 after having the top two scores at Templeton where all students took an 80-question, multiple-choice written test. Pino and Durian then completed an online competition and qualified to advance to the National History Regional Bee March 15 at Marshall Middle School.

Pino is one of 33 students throughout the country who won his regional National History Bee, competing in three rounds that covered U.S. history, world history up to 1945 and world history 1945 to present. Pino won two of the rounds outright and was one point away from winning the third round.

These days, Pino is busy preparing for the national competition by reading history books and working with Templeton social studies and reading teacher Alan Schneider. He also plans to meet with Hamilton High School history teachers to prime for the big event. He is hoping to make it to the final round of national competition which will be televised on The History Channel live from Mount Vernon. The national champion will win a $50,000 college bond.

The founder and executive director of the National History Bee and Bowl is David Madden, a 19-day champion on Jeopardy! who was the captain of his high school’s quiz bowl team. The idea for the National History Bee came to him while studying to become a history teacher. Madden moderated the regional championships and will moderate the national competition.