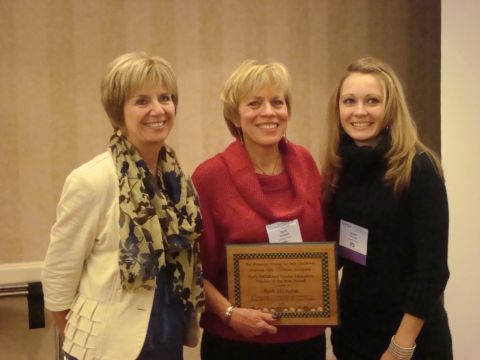 Willow Springs Learning Center speech pathologist Barb Michalak was named the Wisconsin Early Childhood Special Education Teacher of the Year by the Wisconsin Division for Early Childhood. Michalak was nominated by Hamilton Special Services Supervisor Mardi Freeman for the award that honors an educator who goes beyond teaching to empower families in providing the best for their children. Wisconsin educators who serve children under the age of six with special needs are eligible to be nominated.

Freeman noted Michalak’s years of dedicated service and willingness to go above and beyond to engage students and their families. Michalak is actively involved in the district’s Preschool Options initiative, presents at numerous parent, daycare and preschool information nights, and teaches a summer school class each year in which she creatively encourages students to develop their language through play.

A parent of Michalak’s students wrote in support of her nomination acknowledging her professionalism and competence. She described Michalak as a phenomenal speech therapist who is highly respected for her excellent work and knowledge of language delays and speech impairments. She noted Michalak valued parent involvement, often offering suggestions for things that could be done at home to stimulate language growth.

Michalak received her award Oct. 21 at the 2011 Above and Beyond Professional Development Luncheon which was part of the Wisconsin Early Care and Education Conference in Appleton.