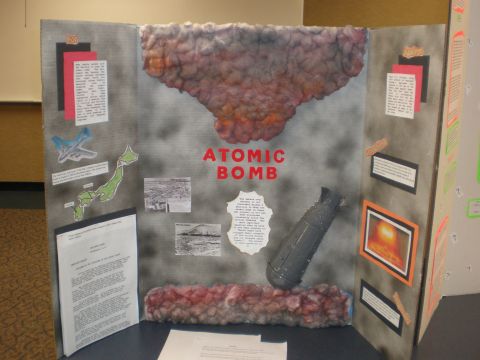 More than two dozen Templeton Middle School eighth-graders will compete March 5 at the regional level of National History Day as a result of successful participation at their school. Finalists were selected Feb. 16 at the school level and will go on to compete at the University of Wisconsin – Milwaukee.
National History Day is an academic enrichment program for students in grades 6-12. Students select topics connected to an annual theme and complete their own in-depth research on the topic. This year the annual theme is “Debate and Diplomacy.” Students present their conclusions by creating museum-style exhibits, media documentaries, research papers, interactive websites and dramatic performances.
The school event is the first step in a competition cycle that can take students from the school level to regional, state and national competitions. At each level of competitions, students share their work with the peers, historians, educators and professionals in related fields as they compete for special awards and the opportunity to advance to the next level of competition.
Students from Templeton and their projects advancing to the regional level are:
Research papers:
Individual exhibit boards:
Group exhibit boards:
Individual website:
Group website:
Documentary: