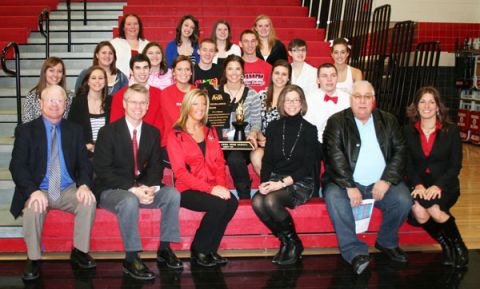 Hamilton High School was presented Feb. 23 with the “Spirit of Excellence Award” from the Wisconsin Association of School Councils (WASC). Hamilton was first chosen as one of six regional recipients, and then as the statewide winner of the award which honors schools that achieve excellence in leadership, sportsmanship and service to their school and communities.
Schools across Wisconsin submitted a detailed portfolio highlighting their achievements which was then judged by a team of leaders from Wisconsin.
Hamilton was recognized by WASC, the Association of Wisconsin School Administrators and the Wisconsin Interscholastic Athletic Association (WIAA) at an all-school assembly where, in front of the entire student body, Student Council representatives were presented with a banner and trophy. Further recognition will take place during an awards presentation at half-time of the March 20 Milwaukee Bucks Game, at the May 8 WASC State Senior High School Conference in Green Bay, a promotional spot during the WIAA State Boys and Girls Basketball tournament and continued recognition on Fox Sports Network throughout the year.
Other 2011 regional recipients were St. Croix, Lakeland Union, Oconto Falls, Brodhead and Adams-Friendship high schools.