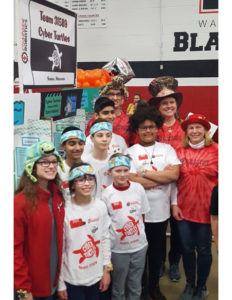 The team was awarded the prestigious First Place Champions Award. The Champions Award is presented to the team that demonstrates superior knowledge in all aspects of FIRST which include project, core values, robot programming and the robot games. Cyber Turtles chose to address the No. 1 cause of water pollution in fresh water bodies – – cigarette butts. Their solution involved a pocket-size shredder where shavings would be recycled then turned in for money.