Hamilton High School Drama Society invites the community to an ambitious version of William Shakespeare’s “A Midsummer Night’s Dream” Feb. 7-9 in the Hamilton Fine Arts Center (HFAC). Shows begin at 7 p.m. Friday and Saturday, and at 2 p.m. for the Sunday performance. 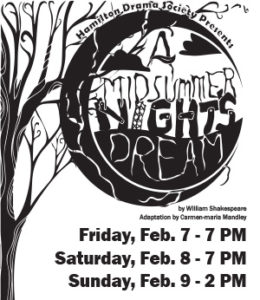 Shakespeare’s most famous comedy, adapted by Carmen-maria Mandley, is re-imagined in a future where the world as we know it is gone, destroyed by technology and a clan of mortals remain.

Theseus, their ruler, plans to marry Hippolyta but as they prepare to wed, Egeus and his wife arrive with their daughter, Hermia, and insist that she marry Demetrius. Instead, she runs away with her love, Lysander. Demetrius chases after her with the help of her friend Helena, who loves Demetrius. Meanwhile, lower class workers prepare to present the play of “Pyramus and Thisbe” at the royal wedding. Fairies have survived on Earth and their king and queen, Oberon and Titania, argue, and an angry Oberon sends his servant Puck to find a magical flower to use on Titania to make her fall in love with the first thing she sees. However, mayhem and merriment ensue when she awakens to see a donkey, and Lysander, who has also received the magic juice, awakens and sees Helena.

Happily, order is (eventually) restored, all fall in love with the proper people, and three marriages take place, to the blessings of the fairies and the entertainment of the audience.

General seating tickets are $8 for adults, $5 for students and senior citizens. Tickets may be purchased 30 minutes before the show at the HFAC Box Office, Office C in the high school or online at www.HamiltonFineArtsCenter.com.