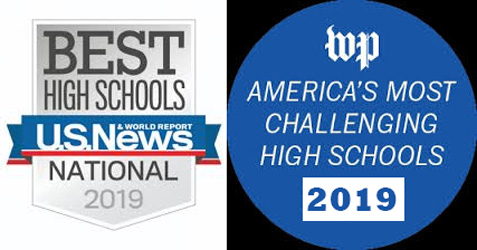 For the fifth consecutive year, Hamilton High School was named to U.S. News & World Report “America’s Best High Schools” list. The ranking highlights the best public high schools in the nation after reviewing data from more than 21,000 high schools to identify how well public schools serve all of their students in preparing them in basic skills and readiness for college-level work. Schools were rated on reading and math proficiency and performance (40%), college readiness (30%), college curriculum breadth (10%), underserved student performance (10%) and graduation rate (10%).

For the fifth year since 2014, Hamilton made The Washington Post’s “America’s Most Challenging High Schools” list. Public and private high schools are ranked through an index formula that is the number of Advanced Placement tests given each year, divided by the number of seniors who graduated that year. A ratio of 1.000 means the school had as many tests as graduates. Hamilton’s index score is 1.967 – the highest in the school’s history. Hamilton was one of only 21 Wisconsin high schools that made the list.

Hamilton Principal Candis Mongan said being named to the lists reflects the hard work of the teaching staff and their commitment to offering an academically rigorous learning environment, but one that is also focused on the social and emotional needs of students.

“Academic excellence has become a tradition at Hamilton High School because we are a community of learners focused on achievement, growth and what is best for all students,” Mongan said.