After nail-biting competition, Templeton Middle School produced its school champion from the top nine finalists in its Geographic Bee. 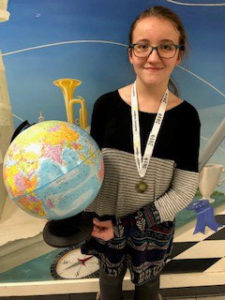 All Templeton students participated in a preliminary round by taking a 25-question written test. Students who scored highest on that test advanced to the semi-final round and the nine finalists took part in the final championship round Jan. 8.

As the school champion, Heyn will take a written test to qualify for state level competition. Up to 100 of the top scorers in each state will be eligible to compete March 29 in state level National Geographic Bee events. The winner of each state bee will travel to Washington, D.C., in May to participate in the national event.

The annual National Geographic GeoBee is a geography competition designed to inspire and reward students’ curiosity about the world. Questions cover not only geography, but also cultures, physical features, history and earth science.