Wisconsin School Report Card data were released recently, and the Hamilton School District’s performance once again was among the highest in the state. Hamilton was the highest rated school district in Waukesha County and sixth highest among Wisconsin’s 367 K-12 school districts. 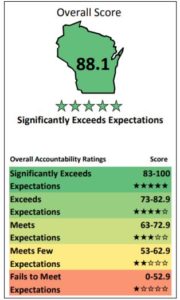 School Report Cards are based on four priority areas: student achievement in English language arts and mathematics; student growth; closing gaps between student populations; and measures of readiness for graduation and postsecondary success. Using all these measures, Hamilton ranked sixth among 368 Wisconsin school districts and was one of only 26 districts to earn the top designation of “significantly exceeds” expectations for performance.

“Results of the latest State Report Card are a reflection of the deep commitment that students, staff and community have for education,” said Hamilton Superintendent Paul Mielke, Ph.D.

“Our success is possible because citizens have recognized that investing in education supports a vibrant community and high quality of life not just for students, but for all who live here,” Mielke said. “I am proud of the outstanding accomplishments of our schools.”

Wisconsin implemented a new educational accountability system five years ago with more rigorous benchmarks and a new way to report school progress. Each public school now has a School Report Card that lets people know how well it is preparing students for their futures. Because of strategic planning efforts and a track record of focusing on student achievement, schools in the Hamilton School District earned positive ratings under the new system.