The cast and crew of Hamilton High School’s one-act play, “Selfies” by Bradley Hayward, received an All State Award at the 2017 State High School Theater Festival hosted at University of Wisconsin-Whitewater. The All State Award was one of nine awards earned by the team. 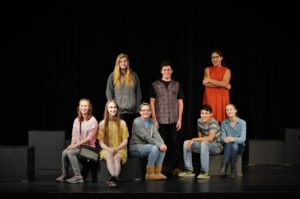 The One-Act festival is part of the Wisconsin High School Forensics Association Theater Festival (WHSTF). The WHSTF provides students and teachers with an opportunity to learn from trained theater professionals and educators, to take the stage and to watch peers perform.