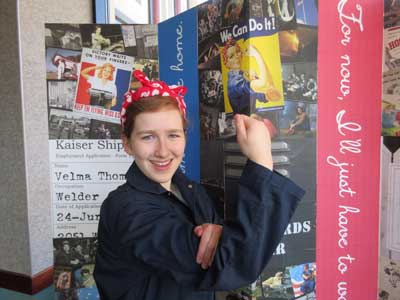 Hamilton High School junior Erin Magoon qualified for national competition April 23 at the National History Day state competition in Madison. Because of her success at the state level, she will compete in June in Maryland. She also was awarded the American Labor Award for addressing a topic about the workforce.

Magoon spent months researching her topic, “We Can Do It: Exploration of Women’s Work During and After World War II,” including interviews and correspondence with women from around the country who worked during the war. She wrote a 10-minute skit that included the experiences of three women during the 1940s who were nicknamed Rosie the Riveter, the icon of a government campaign to recruit female workers to support the war efforts of Americans fighting overseas.