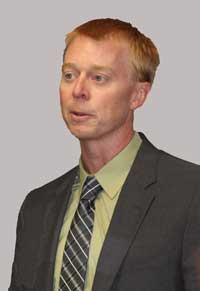 The Hamilton School Board approved the appointment June 16 of John Peterson as the special services supervisor, contingent on contract release from his current employer. Peterson replaces Mardi Freeman who accepted the position of special education and student services director for the Cooperative Educational Service Agency #1. Peterson will begin his position July 1.

“We are pleased to hire an individual who brings strong leadership and is committed to developing the full potential of each student,” Hamilton Superintendent Kathleen Cooke said. “Mr. Peterson has great knowledge of special education, is an advocate for children with disabilities and has the ability to establish collaborative, working relationships with parents and staff.”

Peterson has been the pupil services director for the Fort Atkinson School District since 2007. He started his education career in 1999 as a school psychologist for the Albany School District where he was later named special education director before taking that role with the Waterford Special Education Cooperative in 2004. He has been on the Wisconsin Council of Administrators of Special Services (WCASS) executive board since 2006 and was recently chosen president elect. He earned his bachelor’s, master’s and education specialist degrees from the University of Wisconsin (UW) – Eau Claire and completed other postgraduate work at UW – Madison.