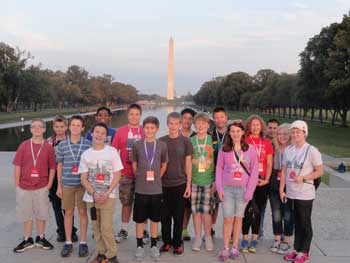 The school group traveled to Gettysburg and Washington, D.C., visiting battlefields and studying the impact the battle had on the war, Mount Vernon, U.S. Capitol, National 9/11 Pentagon Memorial, Holocaust Museum, several Smithsonian museums, the White House, U. S. Supreme Court, Library of Congress and many of the war memorials, including the Lincoln, Korean, Vietnam, Iwo Jima, Jefferson and Martin Luther King, Jr.

For many, a highlight of the trip was the visit to Arlington National Cemetery in Virginia. While there, Templeton students witnessed the changing of the guard at the Tomb of the Unknown Soldier. Following the guard-changing, Templeton students Cole Peske, Ian Turley, Bella Raykowski and Hang Yin had the honor and privilege of participating in the wreath-laying ceremony. The wreath was placed at the Tomb of the Unknown Soldier out of respect and honor for the many men and women who contributed to the freedom and democracy of the United States.