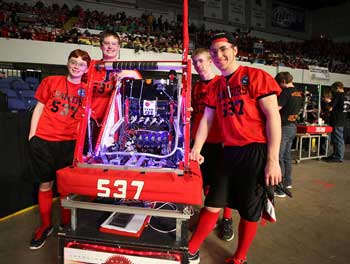 Team 537’s “Clifford the Big Red Bot” placed first among 60 in the 2014 FIRST Wisconsin Regional Robotics competition earning a team record of first seed alliance for the elimination matches. The team advanced to the semifinal match. A team record of third place seed overall was earned at the earlier Crossroads Regional competition.

Charger Robotics team members were featured on CNN in a story about development of America’s next leaders through their involvement with Robotics. The story can be read online at http://ireport.cnn.com/docs/DOC-1112148?ref=email.

A total of 70 Hamilton students are involved in Charger Robotics, which is supported by QuadTech, Rockwell Automation, GE Healthcare and Centare through financial donations and employee mentors. The team is advised by Hamilton teacher Lori Hinytz and co-advised by Kari Woods. To learn more about the Charger Robotics team, visit http://team537.org/.