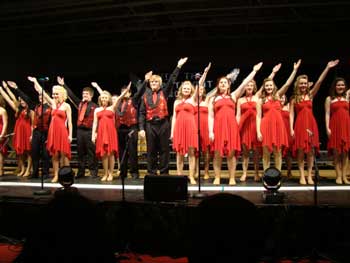 Hamilton High School’s newly competitive show choir, Synergy, will perform its final show of the season March 12 at 7 p.m. in the Hamilton Fine Arts Center. Admission to the choir concert is free.

Under the direction of Marilyn Mascitti with choreography by Jordan Kalis, the group’s show includes “All Fired Up” by Pat Benatar, “Firework” by Katy Perry, “Light the Fire Within” by LeAnn Rimes and a “Walking On Sunshine-Halo Medley” from Glee.

With 30 singer-dancers and a three-piece back-up combo, the group was rewarded for months of rehearsals and hard work at recent competitions. Its first competition was at Burlington High School’s “Chocolate City Showcase” where choir members took home first runner-up in Class A and earned “The Sweetest Award” trophy for spirit demonstrated during performance and in the audience.

Synergy competed again in February at Brodhead High School’s “In the Spotlight” Invitational. Against the odds at this larger competition, Synergy brought home another first runner-up trophy in Class A.

Mascitti said the choir and directors are extremely excited about their accomplishments this season and encouraged community members to attend the free concert.

“Please come and cheer on these talented kids, and many others, at the Solo and Ensemble Showcase Concert,” Mascitti said.