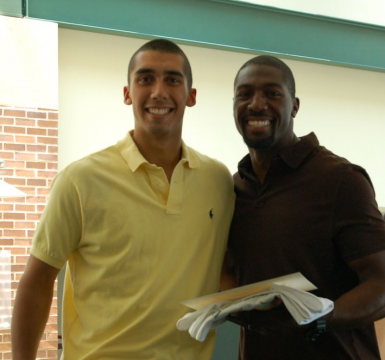 Hamilton High School senior Aaron Beck was selected as a 2011-2012 Wisconsin Positive High School Athlete. Beck was nominated in the Tennis Boys category for his positive attitude, character and leadership; one student was selected state-wide in 23 sports categories.

“Aaron has a strong work ethic both on the court and off the court. During matches he remains composed and dignified, even if he is struggling in the match. He is constantly working to improve his game and help the team. He is the definition of a true sportsman,” wrote Alan Schneider, Hamilton High School tennis coach.

Packers Pro Bowl wide receiver Greg Jennings is the spokesperson for the movement to inspire young athletes that learning to play sports the positive way will help build life skills they will be able to use long after their playing days are over.

Beck and Schneider attended the June 15 awards ceremony in the Lambeau Field Atrium.  Following an inspirational speech by Jennings, Beck received a signed shirt, plaque and photo with Jennings.

Positive Athlete is a group of high-character professional athletes teamed up to promote the benefits of positivity to young athletes around the world. These athletes believe it is crucial to begin shaping the futures of young athletes for life skills beyond athletic competition. Rotary Clubs of Wisconsin was the presenting sponsor of the Wisconsin and Michigan Upper Penisula program.