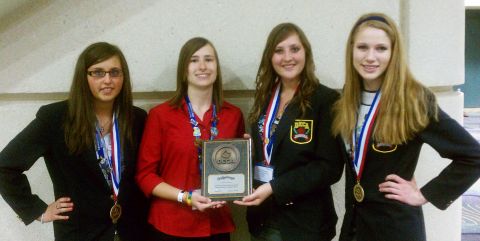 The Hamilton chapter was recognized at the opening session for receiving the Diamond Level Membership Award, and the Gold Level School-Based-Enterprise Certification. As a Gold Level Certified School-Based-Enterprise, the chapter was allowed to send three representatives to compete by presenting on a best practice of the Charger Corner School Store. Representing Hamilton were former store manager Lauren Wirsbinski and future managers Elizabeth Fricke and Brittany Paa. They presented on the successful “Elf” holiday promotion that the marketing class planned and executed in December.

Their presentation was chosen as one of the top 16 in the country — the highest level available in the competition. The three presenters were on stage for the final awards session and received medals and a beautiful plaque to hang in the Charger Corner School Store. Also at the conference, competing in a different category was former school store manager Sarah Bregant who worked with Lauren Wirsbinski to produce the 40-page recertification paper. This marked the fourth consecutive year that Hamilton DECA students were recognized on stage at the final awards session of the International Career Development Conference.

DECA is an association of marketing students. More than 15,000 delegates attended the international conference which featured competition in more than 50 categories of marketing, management, hospitality and finance.