Justin Gumm was named head coach of the Hamilton High School Chargers football team. Gumm, a 2009 graduate of Culver-Stockton College in Canton, Mo., is the physical education and strength-conditioning teacher and assistant head football coach at Grafton High School. Beginning in August, he will be a part-time physical education and health teacher at Hamilton in addition to his coaching responsibilities. 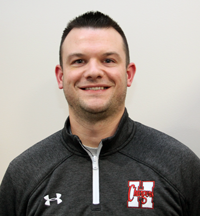 Gumm has 10 years of experience coaching or teaching at high schools in Missouri, Illinois and Wisconsin. Before joining Grafton High School, he had been head football coach for three years at Kettle Moraine High School where he became the highest winning-percentage football coach in the school’s history and ended a nine-year play-off drought with back-to-back postseason appearances in 2017 and 2018.

“In addition to being highly recommended from people in the football community, Justin had a detailed plan and proven ability to develop relationships with student-athletes and community members,” Gosz said.

“We are fortunate and excited to have someone with Coach Gumm’s track record lead our football program,” he said.