National competition will be in June.

In addition, the school’s one-act play, “I Never Saw Another Butterfly” earned an All-State Award. Outstanding actor awards went to Maggie Flynn for her role as Raja and Hayden Hotchkiss, junior, for his role as Honza. The play is about young people who were incarcerated in the Terezin concentration camp.

Community members are invited to a free performance of the one-act play Dec. 3 beginning at 6:30 p.m. in the Hamilton Fine Arts Center, W220N6151 Town Line Road, Sussex. Following the performance, Eva Zaret, a holocaust survivor, will speak about her real-life experiences as a child in the Budapest Ghetto.

Two holiday concerts, which are free and open to the public, will be held in the Hamilton Fine Arts Center. 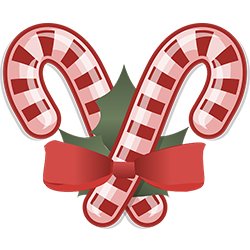 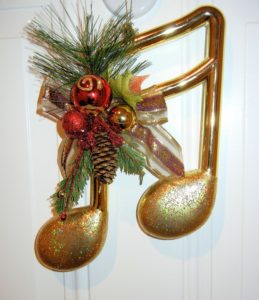 A total of 250 students who are members of Hamilton High School choirs and Templeton Middle School Eighth Grade Chorus will perform traditional holiday and winter-themed music. This event is an annual holiday tradition for senior citizens and community members.

Marcy Elementary School has a week’s worth of activities to celebrate being named a Blue Ribbon school. The school learned in September that it was one of select schools in the nation recognized as a National Blue Ribbon School for 2019. Marcy Principal Michele Trawicki, First Grade Teacher Kim Zabel and Instructional Services Supervisor Katie Little traveled Nov. 14-15 to Washington D.C. to receive the award. 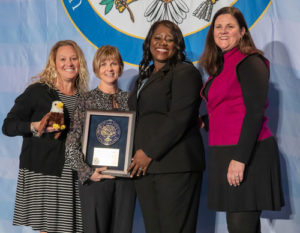 Less than one-half of one percent of schools nationwide receive the award, which is given in recognition of the school’s overall academic performance or progress in closing achievement gaps among student subgroups.

In addition to raffle prizes and school announcements throughout the week, the celebration includes:

Members of Hamilton High School Junior Optimist Club, with help from the National Honor Society and Student Council, met in November to pack 60 shoe boxes with items that were shipped to children in South America and Africa. 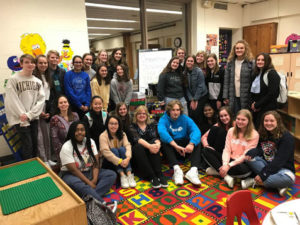 Teachers throughout the high school had large boxes in their classrooms for two weeks that students filled with donated items. Junior Optimists, National Honor Society and Student Council members then packed individual shoe boxes after school with a variety of items to be given to children affected by war, poverty, natural disaster, famine and disease.

What is not a first? The district as a whole earning the top rating. In fact, Hamilton has significantly exceeded expectations all six years Wisconsin School Report Cards have been produced. This year, Hamilton was the 10th highest rated district among Wisconsin’s 367 K-12 school districts and third highest in Waukesha County.

School Report Cards are based on four priority areas: student achievement in English language arts and mathematics; student growth; closing gaps between student populations; and measures of readiness for graduation and postsecondary success. In addition, they measure chronic absenteeism and dropout rates. Using all these measures, Hamilton was one of only 25 K-12 districts to earn the top designation of “significantly exceeds” expectations for performance.

Hamilton’s student achievement scores were in the top 1-2% in the state. Among the 367 Wisconsin K-12 school districts, Hamilton had the:

“This is a true accomplishment for our district,” said Hamilton Superintendent Paul Mielke, Ph.D. “This report is an important measure that reflects the performance of our schools and the district. Using the data from this report, we see our successes and know where to focus attention for future success.”

“The results we have attained are due to the hard work of students and staff who put a priority on learning, as well as the support and high expectations of our parents and community,” Mielke said.

Wisconsin implemented a new educational accountability system seven years ago with more rigorous benchmarks and a new way to report school progress. Each public school now has a School Report Card that lets people know how well it is preparing students for their futures. Because of strategic planning efforts and a track record of focusing on student achievement, schools in the Hamilton School District earned positive ratings under the new system.

Achievement discrepancy between majority and minority students, students of low economic status, special education and English learners exists in education. While the Hamilton School District sees this to a lesser extent than state and national averages, gaps among the various student groups exist. 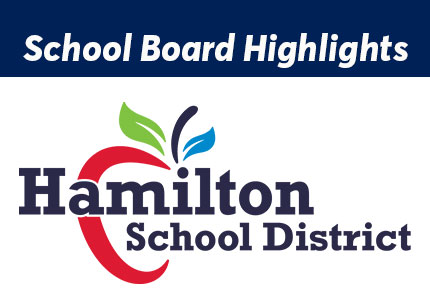 Key findings of the report are:

The district supports high quality instruction and assessment practices to ensure the success of all students including the following:

The schedule for the 2020 spring election was released. Terms are up for School Board members Jay Jones, who holds the Lannon seat, and Michael Hyland, who is in the at-large seat.

The School Board approved the district’s 2020-21 budget timeline that includes:

In his report, Gosz recommended that the district: 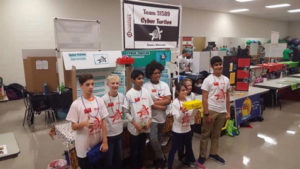 Hamilton High School’s Drama Society invites the community to “Butterflies and Budapest: Two Stories of Children in the Holocaust.” Students will perform their state-qualifying one-act play, “I Never Saw Another Butterfly,” by Celeste Raspanti. They have invited Eva Zaret, a holocaust survivor, to speak afterwards about her real-life experiences as a child in the Budapest Ghetto.

“I Never Saw Another Butterfly” is a collection of works of art and poetry by Jewish children who lived in the Terezin concentration camp. The title comes from a poem written by a young man who was incarcerated in Terezin and later killed at Auschwitz.

The book was later turned into full-length and one-act plays. The play centers on Raja, one of the children who survived Terezin, and her family, friends and classmates. She shares her story of living in the concentration camp, while retaining a world filled with butterflies and flowers with other children in the camp.

Eva Zaret, born Eva Klein in Budapest, Hungary in 1936 lived through the Holocaust in the Budapest Ghetto. After the war she regained her health in the Carpathian Mountains with family. On a trip into the city her family was caught in the outbreak of the Hungarian Revolution, which she and her husband escaped on foot, eventually coming to the United States. She now volunteers on the speakers’ bureau for the Nathan and Esther Pelz Holocaust Education Resource Center, a program of the Milwaukee Jewish Federation.

Sarah Plamann, Hamilton School District music teacher and high school drama director, said the cast had been working with the Jewish Holocaust group as they prepared for one-act play competition.

“When students realized there were survivors in the area, they wanted to hear from one to better understand the story they were telling,” Plamann said. “Being able to put things together in this powerful way seemed the best way to tell these stories.”

A total of 86 Templeton Middle School students and eight teacher-chaperones traveled Oct. 26-29 on an extended field trip to Washington, D.C. and Charlottesville, Va. 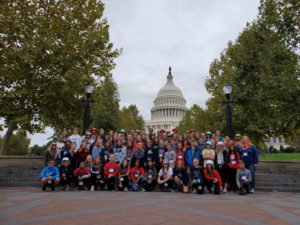 A highlight of the trip was the visit to Arlington National Cemetery where students witnessed the changing of the guard at the Tomb of the Unknown Soldier. Templeton students, Cash Campbell, Kayla Dwyer, Samuel Maurer and Peyton Toepfer participated in the wreath-laying ceremony. 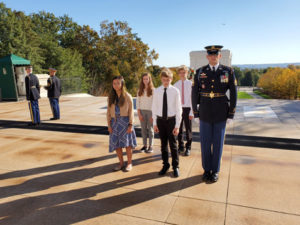