The JA Business Challenge is an exciting business strategy tournament for young entrepreneurs to run global companies. Students are teamed with a local business professional and taught about the nuances of running a global business. The competition is uniquely designed to unleash student creativity, test leadership skills and demonstrate the competitive nature of the free enterprise system. 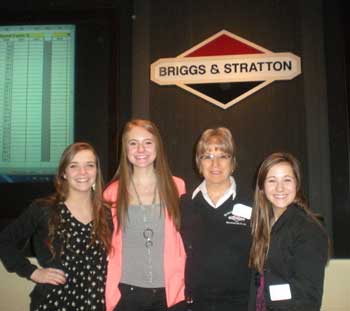 Of the 1.5 million entrants, some 50,000 with the highest PSAT scores in critical reading, math and writing skills qualify for recognition. About 16,000 high-scorers are notified that they have qualified as semifinalists. They are the highest-scoring entrants in each state. About 15,000 of these students go on to become finalists. The selection of some 8,300 Merit Scholarship winners from the group of finalists is now in progress and will be announced in March.

Hamilton High School seniors Caroline Hope, Aaron Konop and Andrew McClone are recipients of the Wisconsin Academic Excellence Scholarship. The four-year scholarship is worth $2,250 annually for tuition at a Wisconsin public or private college, university or technical college.

The scholarships are administered through the Wisconsin Academic Educational Aids Board and funded through matching state and college contributions. They are given annually to recognize the state’s highest achieving students and to provide an incentive for them to continue their education in Wisconsin. Students are chosen based on cumulative grade point averages after the first semester of their senior year. In the event of a tie, ACT or SAT scores, the number of Advanced Placement (AP) courses taken, AP grade point average and involvement in curricular and co-curricular leadership activities are taken into consideration.

Hamilton’s recipients will be recognized May 22 at the Senior Scholarship Ceremony in the Hamilton Fine Arts Center. 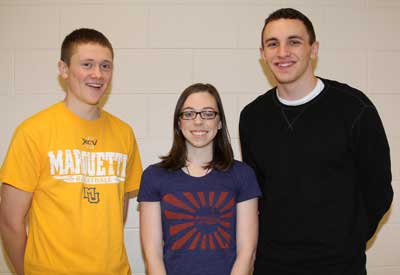 Hamilton School Board members approved leasing 700 laptops for four years to meet the demands of preparing students to be college and career ready. The new technology also will get students used to being assessed in an online environment, which the state’s new Smarter Balanced Assessments will require.

Cost for the four-year lease of the laptops will be $399,026, which will come from the district’s technology equipment budget.  At an additional cost of $112,719, the district will own 47 mobile carts that house 15 computers each when the lease is up.

Information Technology Manager Ryan McMillan said the computer labs in the district are booked solid during the school day. Having the laptops available on mobile carts that can be wheeled into classrooms as needed will make technology more accessibility for students and staff.

Breakdown of laptop distribution by school is: 150 each at Hamilton High School and Templeton Middle School, 135 at Woodside, 120 at Marcy, 75 at Lannon, 60 at Maple and 10 spare machines.

School Board member Michael Hyland said he appreciated the IT Department’s work on securing a lease agreement at a reasonable cost, but he was uncomfortable voting in favor of the plan because it represents another unfunded mandate from the state. The state will implement its new Smarter Balanced Assessments in 2014-15 and will require them to be taken online.

“This is another item in our budget that is an expense that we are picking up,” Hyland said during the Buildings & Ground and Finance Committee meeting earlier in the evening.

He said people at the state are making decisions for local school districts, but they don’t have any money invested in it.

“I feel we are doing too much testing and it means teachers are spending less time with students in the classroom,” Hyland said.

At the committee meeting, School Board member Deborah Briggs said she agreed that testing is overemphasized, but she saw greater access to technology as benefiting student learning.

“Part of the reason we are doing this is because of testing, but the requirement for kids is to be proficient and able to use technology in all areas,” Briggs said.

School Board member Gerald Schmitz said while some of the impetus for getting more computers came from state requirements for future online assessments, he believes the technology will be used for learning.

“It’s really the students who will gain in the long run,” Schmitz said.

The additional computers will take the district’s computer-student ration from 5:1 to 3:1.

Two parents spoke during the public comments of the meeting. They asked the board to consider changing the way grade point averages are determined so that the grade earned in high school mathematics classes taken by accelerated eighth-graders do not affect class rank. The issue was not on the agenda and the School Board could not discuss at the meeting.

Marcy addition gets board member review

Members of the Buildings & Ground Committee toured the completed construction project at Marcy Elementary School. Students and staff took full occupancy of the addition when classes resumed after winter break. The portion of the project that added six new classrooms and restrooms is complete, but when school lets out in June, two existing classrooms will be turned into a large group area, completing the $2 million project. The district did not go to referendum for project, but instead used its operational budget over two years to cover costs.

In celebration of Youth Art Month, the artwork of students from throughout the will be on display during March at the Pauline Haass Public Library, N64 W23820 Main St., Sussex. The public is invited to view the artwork during regular library hours.

A reception honoring the artists and their teachers, held in the library, will be open to the public from to 6 p.m. March 5. During the reception art activities will be offered in the Youth Services area. The Friends of the Pauline Haass Public Library will provide refreshments.

More than two dozen Templeton Middle School eighth-graders will compete March 2 at the regional level of National History Day as a result of successful participation at their school. Finalists were selected Feb. 11 at the school level and will go on to compete at the University of Wisconsin – Milwaukee.

National History Day is an academic enrichment program for students in grades 6-12. Students select topics connected to an annual theme and complete their own in-depth research on the topic. This year the annual theme is “Turning Points in History: People, Ideas, Events.” Students present their conclusions by creating museum-style exhibits, media documentaries, research papers, interactive websites and dramatic performances.

The school event is the first step in a competition cycle that can take students from the school level to regional, state and national competitions. At each level of competitions, students share their work with the peers, historians, educators and professionals in related fields as they compete for special awards and the opportunity to advance to the next level of competition.

Students from Templeton and their projects advancing to the regional level are:

Hamilton High School won the regional “Spirit of Excellence Award” from the Wisconsin Association of School Councils (WASC). Hamilton was chosen as one of six regional recipients. The award honors schools that achieve excellence in leadership, sportsmanship and service to their school and communities.

Schools across Wisconsin submitted a detailed portfolio highlighting their achievements which was then judged by a team of leaders from Wisconsin.

Hamilton students representing 11 curriculum areas were selected as students of the month for January. They are: 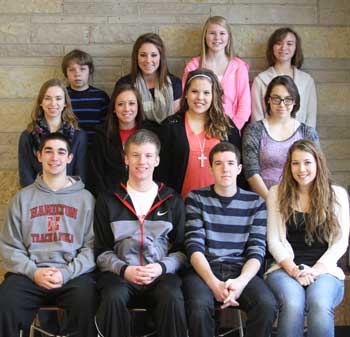 “We are scheduling this short and sweet event during a school dance so parents can join their kids at TMS, but do two very different activities,” explained Home & School President Carrie Perock.

Mexican-themed refreshments and free admission are two ways planners hope to entice parents to stop by and place a bid. The list of auction items also is impressive.

“We are thrilled to be offering a Donald Driver signed football for auction, as well as several great package experiences for families,” said Perock. “One lucky family will go home with a $500 bath or kitchen makeover.”

The organization’s fall fundraiser which normally raises enough funds to support a year’s worth of field trips and experiences fell significantly short this year. Home & School board members and school staff decided to get creative in finding a way to infuse the organization with desperately needed funds.

“We were hoping to avoid conducting another fundraiser and we think families will appreciate getting a great deal for their donation,” said Perock.

The event takes place from 7 – 9 p.m March 22. at Templeton Middle School, N59W22490 Silver Spring Drive, Sussex. Parents and family of students in the Hamilton School District are encouraged to attend. Like the TMS Home & School Facebook page at www.facebook.com/TempletonHomeSchool to receive updates on this event.