Hamilton High School Drama Department presents “Curtains” a musical comedy whodunit Feb. 7-10 in the Hamilton Fine Arts Center. Shows are at 7 p.m. Thursday through Saturday, and at 2 p.m. for the Sunday performance.

“Curtains” is set in the brassy, bright and promising year of 1959. Boston’s Colonial Theater is host to the opening night performance of a new musical. When the leading lady mysteriously dies on stage the entire cast and crew are suspects. Enter a local detective who just happens to be a musical theater fan! Produced through special arrangements with Theatrical Rights Worldwide.

Tickets are $8 for adults, $5 for students and senior citizens. Advance tickets may be purchased at Hamilton High School Office C during office hours. For additional information, please call the Drama Department Box Office at (262) 246-6471 x1552.

An evening of great food and entertainment is in store for the community Feb. 12 as the Hamilton School District Band Boosters hosts its annual Jazzy Italian Dinner from 5 p.m. until 6:30 p.m. Tickets for the all-you-can-eat dinner are $8 for adults, $7 for senior citizens over age 60 and students ages 6-18, and $5 for children ages 2-5. Add $1 for tickets purchased at the door.

School Board members approved replacement of 214 desktop computers, 60 monitors and network infrastructure upgrades for a total cost of $209,754. The district annually replaces a portion of its computers so that none is more than five years old.

A total of 64 computers will be replaced in the Templeton Middle School Project Lead The Way labs with the remaining 150 computers dispersed throughout the rest of the district. Information Technology Manager Ryan McMillan noted that this year’s purchase was somewhat less than a typical rotation purchase, but said he is likely to be back with a recommendation for additional technology requests to comply with future state testing initiatives that will require more student access to computers.

School Board members will tour the completed Marcy addition in February. 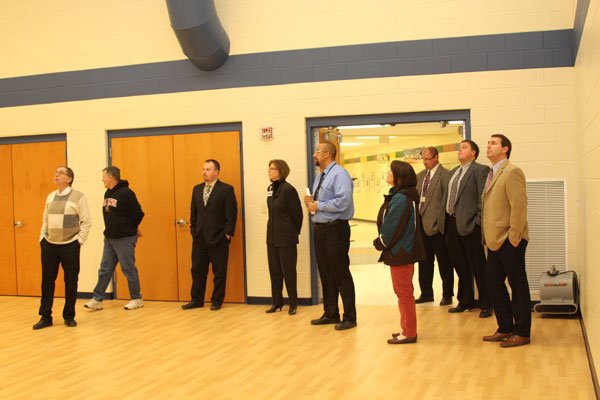 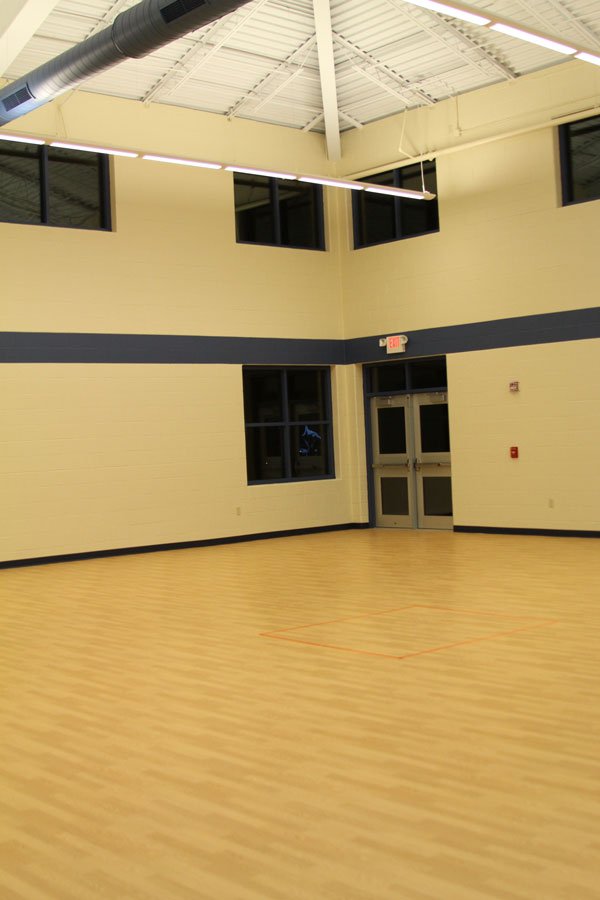 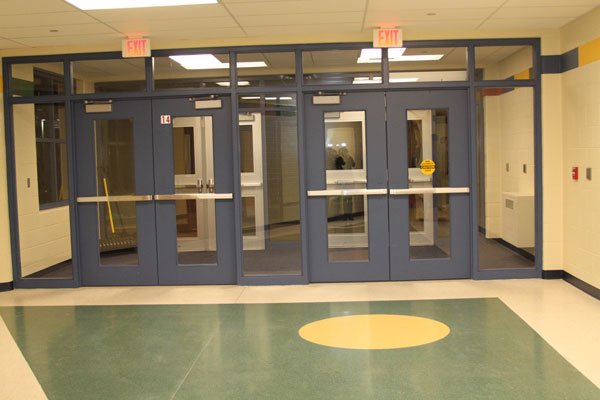 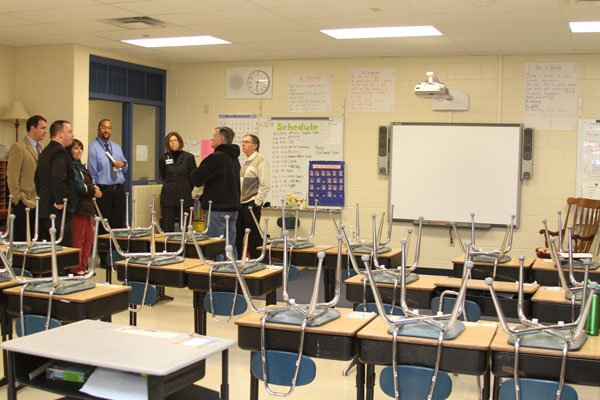 Business Services Assistant Superintendent Bryan Ruud gave an update on private school transportation costs to the district. A total of 138 students are transported to St. Dominic’s Catholic School and St. John’s Lutheran School. In addition, more than 284 parent contracts are provided with payments going directly to parents who transport their children to private schools in a radius area outside the district. The cost to the district is about $250,000 to provide bus transportation and direct payments to parents.

The School Board approved the middle school course catalog that had no changes to content, but provided a new format. Templeton Principal Patty Polczynski said the format change provided more specifics about the courses and emphasized disciplinary literacy and 21st century initiatives.

After implementing new strategies to collect outstanding student debt in 2005, students are less likely to have unpaid fees. Students are reminded about their unpaid debt twice each year and asked to pay it off. In addition, a policy went into effect in 2009-10 that requires clearance of all unpaid fees and fines before a parking permit is issued. Business Services Assistant Superintendent Bryan Ruud credited high school administration for doing a good job following up with students.

Lannon Principal and Summer Opportunities Coordinator Dick Ladd reported on plans for the upcoming summer school. Enrichment courses are set for June 19 – July 17. Templeton Middle School promotional classes will begin June 17 and end July 26. Students will have off July 4 and 5 for the Independence Day holiday.

IT gets help with added part-time position

More requests for data from state and federal agencies along with the growing need to assist instructional staff has been putting a squeeze on the Information Technology Department. In an effort to alleviate the increasing demands for technology services, School Board members approved adding a half-time administrative assistant position. In a separate action, the School Board appointed Renee Mysliwski to fill that position.

The district is gearing up for Wisconsin Smarter Balanced Assessments which students will take online. In addition, the district will migrate to a new state Student Information System within the next year. Providing more administrative assistance hours will help the district meet these new requirements.

The following Hamilton students earned medals and qualified for state competition in their respective series:

Also recognized were Kayla Muckerheide and Maikong Vang, who earned a medal in travel and tourism decision making.

The Hamilton DECA chapter received fifth place in the Chapter of the Year award and the Community Service Award; and was recognized with the Acts of Kindness award for its adopt-a-classroom project.

The State DECA Career Development Conference will be held March 19-21 at the Grand Geneva Resort and Conference Center in Lake Geneva, Wisconsin.

Hamilton High School students representing 11 curriculum areas were selected as students of the month for December. They are: 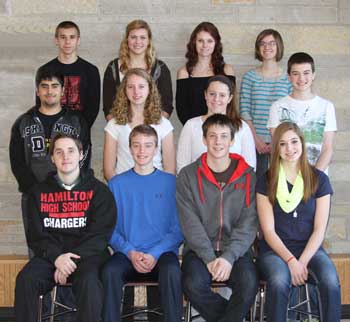 Hamilton High School senior Emily Jansen recently signed a letter of intent to attend Viterbo University on a softball scholarship. Jansen, from Sussex, earned letters in softball all four years and second team All Conference  junior year. She is Hamilton’s all-time save leader and plans to study clinical lab sciences.

Parents who want their children considered for early admission into a Hamilton School District 5-year-old kindergarten or first grade class next fall should apply in writing by March 1 to their elementary school principal. Application forms are available at elementary school offices.

Parents making application will meet with the principal. During that time, a brief interview will take place and the application will be completed. The child should demonstrate superior intellectual development, superior language skills and advanced physical, social and emotional maturity. Parents will be contacted no later than mid-March about the next step in the process.

The Hamilton High School new state-of-the-art scoreboard was dedicated prior to a Charger varsity football game. Advertising sales paid for the scoreboard, the first of its kind among Wisconsin high schools. 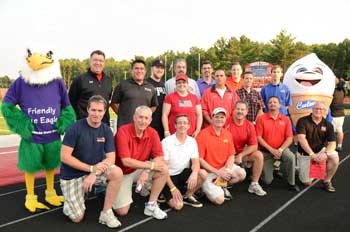 At the Orientation, a brief introduction to the high school and an overview of the registration process will be presented. Course catalogs and other registration materials will be distributed. Students and parents will receive further information about high school requirements and four-year planning.

The Open House, which is open to families registering a student in any grade, will be from 7:30 p.m. to 8 p.m. Administrators, guidance counselors and representatives from departments, clubs and extracurricular activities will be on hand to answer questions. Tours will be conducted by the Hamilton National Honor Society.

Those unable to attend the Orientation and Open House or parents of private school students whose school was not notified about this event should contact the Guidance Department at (262) 246-6476 x1130. Parents with specific questions are encouraged to contact the appropriate high school counselor at (262) 246-6476.