In addition the organization donated resource materials and a flag that flew over Washington’s home to actively engage students in learning about Washington and the founding of the nation.

The mission of the Mount Vernon Ladies’ Association located in Alexandria, Va., is to preserve, restore and manage the estate of George Washington to the highest standards. It seeks to educate visitors and people throughout the world about the life and legacies of George Washington so that his example of character and leadership will continue to inform and inspire future generations. 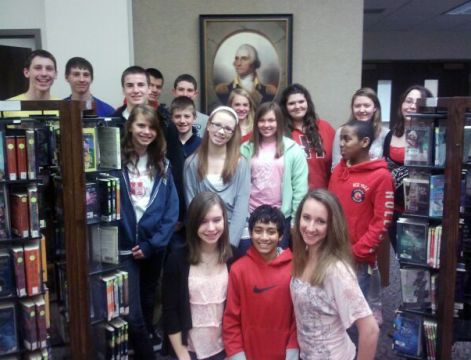 The JA Business Challenge is an exciting business strategy tournament for young entrepreneurs to run global companies. Students are teamed with a business consultant and taught about the nuances of running a global business. The competition is uniquely designed to unleash student creativity, test leadership skills and demonstrate the competitive nature of the free enterprise system. 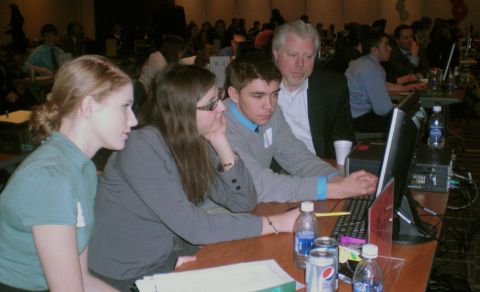 Hamilton High School senior Brittany Paa learned recently that her poem, “Think,” will be published in a national journal. After writing the poem, Paa was encouraged by Hamilton communication arts teacher Kristi Stuesser to start the process of getting her work published. Her first attempt at being published was successful as Creative Communication accepted her poem to be published in the upcoming book, “A Celebration of Poets.”

Creative Communication, a company based in Smithfield, Utah,  promotes creative student writing through its student writing contests. Judges look for well-written pieces that have literary merit, creativity and social significance. Writing that stands out as excellent uses language to create strong images, has a topic that shows an unique awareness to an important issue or shows originality in a creative approach.

Willow Springs Learning Center will hold its annual Scholastic Book Fair March 15 and 21-23. The book fair will be open:

Willow Springs invites community members to enjoy the book fair where they can share a book with a child or purchase a gift for someone special.

Hamilton High School students Elizabeth Schounard and Alexander Schultz participated Feb. 12-17 in the Senate Scholars Program, an intensive educational program offered by the Wisconsin State Senate. Schounard and Schultz were among 33 academically exceptional Wisconsin high school juniors and seniors chosen through a highly competitive admission process to get a hands-on, up-close view of the Legislature’s role in democracy.

Senate Scholars gain experience by working with senators, legislative staff and University of Wisconsin-Madison faculty in areas such as policy development, constituent relations and processing legislation. They attend floor debates, committee hearings, and seminars conducted by UW-Madison’s Robert M. LaFollette School of Public Affairs professors and other individuals involved in the legislative process.

“The students who have gone in the past have really enjoyed the experience, as they have gotten to see government in action, working with members of the state Legislature, the Wisconsin Supreme Court, UW political science professors and different lobbying firms,” Ebert said. “It truly is a great program to help get your feet wet in state politics and network with members of the government and other students who share your interests.”

Students who apply must have letters of recommendation, take a state government aptitude test and work with their state senator to be approved for the weeklong program. 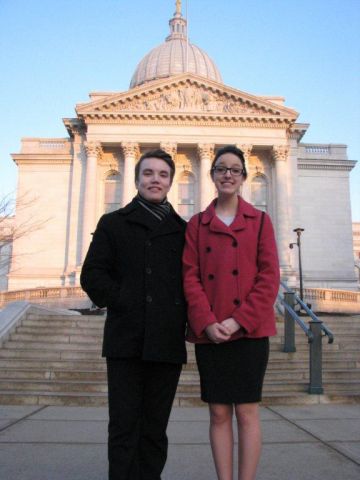 In celebration of Youth Art Month, the artwork of students from throughout the Hamilton School District will be on display during March at the Pauline Haass Public Library, N64 W23820 Main St., Sussex. The public is invited to view the artwork during regular library hours.

A reception honoring the artists and their teachers will be open to the public from 4 p.m. to 6 p.m. March 1. During the reception a Hamilton High Jazz Band combo will perform and art activities will be offered in the Youth Services area. The Friends of the Pauline Haass Public Library will provide refreshments.

A new component to this fun annual event will be a food drive to benefit Sussex Outreach Services. Hamilton art teachers and Pauline Haass Library staff encourage art show visitor to bring a nonperishable food item. Items in most demand are toiletries, cereal, other than cornflakes, single-item meals such as ravioli or Hamburger Helper, soup and macaroni and cheese. Monetary donations also will be accepted. The food barrel will be in place throughout March.

The Hamilton School District continues to have success in collecting unpaid student fees. The total amount owed by the class of 2011 was $192.47 – significantly less than some years when total uncollected student fees reached as high as $1,891.

After implementing new strategies to collect outstanding student debt in 2005, students are less likely to have unpaid fees. Students are reminded about their unpaid debt twice each year and asked to pay it off. Those who have a balance of $50 or more are turned over to a collection agency in July. A new policy went into effect in 2009-10 that requires clearance of all unpaid fees and fines before a parking permit is issued. The district is flexible in working with families and allows payment plans when necessary.

Koeper-Hamblin reported that staff members are committed to helping all students find success. She expressed appreciation that Maple Avenue had resources such as a Title I paraprofessional to help students make progress and low class sizes that allow teachers to hone in on the needs of all students.

“I was wowed by the achievement in here,” School Board member Deborah Briggs said of the Maple Avenue Site Plan report. “Staff are all on the same page and everyone is wanting to make this work. Your tactics are right on.”

Students interested in trying out for the 2012-13 Hamilton High School Chargerette Dance Team are invited to attend tryouts April 23-25 from 6 p.m. to 8 p.m. Tryouts will be in the Auxiliary Gymnasium at Hamilton High School, W220 N6151 Town Line Rd., Sussex.

Hamilton High School’s Charger Corner was among 35 school stores nationwide that earned Gold certification this year and will be recognized at the DECA International Career Development Conference in Salt Lake City.

Hamilton students who worked on attaining certification were store managers Elizabeth Fricke and Erin Geszvain with assistance from faculty advisor and marketing teacher Skip Hay. Fricke and Geszvain will present at state and international career development conferences about customer service best practices that they learned by operating Charger Corner. Last year, Hamilton was among the top 16 school-based enterprises (SBE) in the nation.

SBEs are effective educational tools in helping to prepare students for the transition from school to work or college. DECA developed the SBE Certification Program to recognize outstanding achievement and motivate excellence and growth. The program provides enterprises with standards for model school store operation. A DECA review committee determines if a school store is certified with a bronze, silver or gold designation. The gold certification is the highest among three levels.

DECA is a 501(c)(3) not-for-profit student organization preparing its membership for careers in marketing, management, finance and hospitality. It has more than 200,000 members nationwide. Approximately 105 students are involved in Hamilton’s DECA Chapter.