Templeton Middle School sixth-graders recently studied ancient technologies as a part of their social studies unit on ancient Egypt. Students used Science, Technology, Engineering and Math (STEM) based curriculum to study the impact that technology had on ancient Egyptian life. Students were challenged to research, design and develop a working “shaduf,” which is ancient Egyptian water-lifting technology used for irrigating crops. This technology is still used in developing parts of the world. 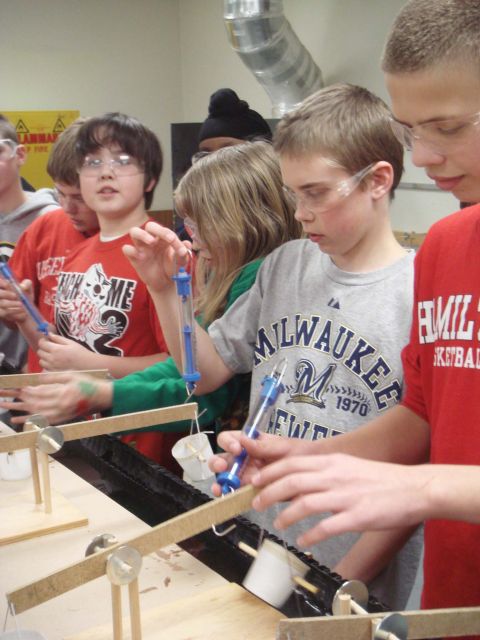 Willow Springs Learning Center will hold its second annual rummage sale May 5 from 9 a.m. to 4 p.m. and May 6 from 9 a.m. to 3 p.m. Admission is free.

The sale will feature items such as infant, toddler and children’ clothing and shoes; toys large and small, indoor and outdoor; books; video games; movies; and baby gear such as pack ‘n plays, swings and strollers.

Items may be donated for sale and should:

Items do not need to be priced. All proceeds will benefit programs and activities for Willow Springs students.

Generations will come together May 6 at Marcy Elementary School’s annual Pen Pal Party.  Fourth-graders from the classes of Amanda Norris, Barb Gogan and Pam Biron will meet their senior citizen pen pals from 1:30 p.m. to 3 p.m. in the school gym. The seniors and students have been corresponding since the fall and are excited to finally meet in person.

The pen pal project is a collaborative effort between the Retired and Senior Volunteer Program (RSVP) of Waukesha County and the Hamilton School District. The goal of the project is to provide students letter-writing experience while learning about life in the past through stories shared with their pen pals.

The celebration will include a sing-along of old-fashioned American songs, a photo of the student and senior, a keepsake craft project, refreshments and a tour of the school. Fourth grade students are responsible for each aspect of the party. To cover the cost of the event, fourth grade students held an ice cream and treat sale as part of an economics unit.

Hamilton High School students in Brenda Savic’s Personal Finance course posted outstanding results in the National Financial Literacy Challenge with half of the class scoring in the top 20th percentile among more than 84,000 students throughout the country who participated. Sophomore Emily Nettesheim had a perfect score on the 40-question financial knowledge test sponsored by the U.S. Treasury Department.

While the nationwide average for the Challenge was a 69 percent, the average for Savic’s class of 22 students was 83 percent.

The challenge was developed by the Department of the Treasury in consultation with economists and the Jump$tart Coalition for Personal Financial Literacy, Junior Achievement USA, the National Council on Economic Education and the National Endowment for Financial Education. It was created to help students learn about the nation’s financial system, including the need for saving and investing, using credit wisely, avoiding fraud and other financial topics.

Hamilton High School Drama invites community members to this spring’s entertaining production of “Our Town” by Thornton Wilder. Performances will be May 5 and 6 at 7 p.m. and matinees on May 7 and 8 at 1 p.m. in the Hamilton Fine Arts Center.
Ticket prices are $8 for adults and $5 for students and senior citizens. Senior citizens are offered a buy-one-get-one promotion on May 7.

“Our Town” is a classic play about the small picture-perfect town of Grover’s Corners. It begins with the stage manager giving an overview on the town and then focusing on the Gibbs and Webb families. Time passes and in act three, the play changes pace and a character gets to visit a childhood memory, realizing the importance of life. 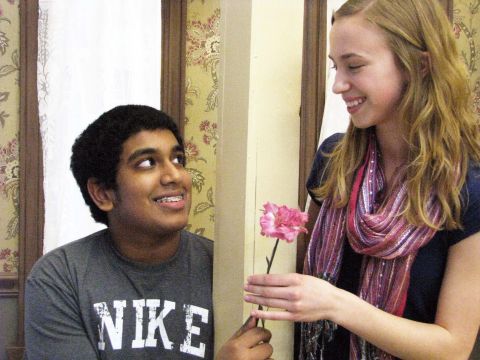 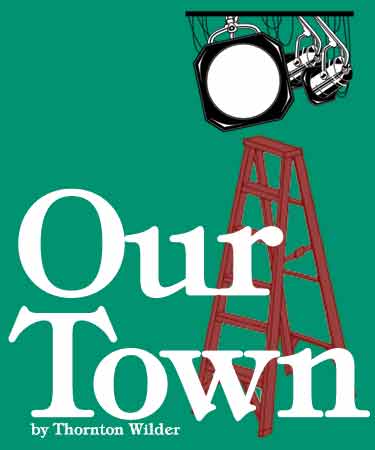 For the third year, the American Cancer Society partnered with classes taught by Hamilton graphic arts teacher Tom Schlueter. Students were asked to create logos and taglines incorporating Relay For Life and the beach theme into their designs. The Relay For Life planning committee chose designs created by Hall and Destache.

“The students do a fantastic job creating original, thoughtful, fun and decorative designs and taglines every year,” said Erin Starck, American Cancer Society community relations manager. “The committee had a difficult time narrowing it down to the top two.”

The American Cancer Society Relay For Life is a fundraiser that provides community members with the chance to celebrate the lives of people who have battled cancer, remember loved ones lost and fight back against the disease. Teams camp out at Menomonee Falls High School and each team is asked to have a representative on the track at all times during the event.

Opening ceremonies for the 16th Annual Relay For Life of Sussex-Menomonee Falls-Pewaukee event will take at 6 p.m. on June 17. For information about the event or to see the logo created by the Hamilton students, please visit www.relayforlife.org/sussex-menomoneefallswi. 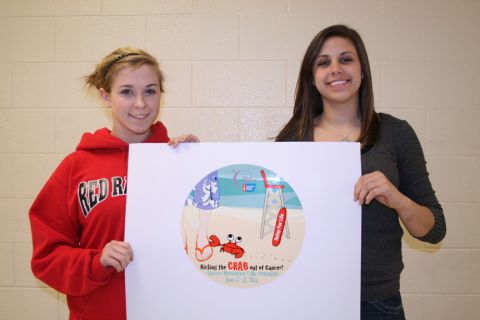 Templeton Middle School’s forensics team earned fourth place in its division March 26 at the Wisconsin Middle Level Forensics Association state meet in Oconomowoc. A total of 15 Templeton students joined more than 1,200 students from throughout the state to compete in various speech and drama categories. They earned their berth at state through successful performance at various local meets in February and March.

The delay in passing the state budget already is having an impact on the Hamilton School District. School Board members decided to move the district’s Annual Meeting from June 20 until Aug. 15. School officials were concerned that without solid information about the state’s budget, they could not provide up-to-date and accurate district data to the community. They anticipate that the move to August will provide adequate time for the state budget situation to be resolved and local implications will be better known.

School lunch prices will rise 15 cents next fall to offset increased expenses. Student lunches will be $2.25 at elementary schools and $2.65 at middle and high schools. Adult lunches will be $3.40. The cost for milk will remain at 30 cents for all students and staff.

In a memo to the School Board, Food Service Manager Judy Pinter reported that the district has experienced commodity cutbacks and increased costs for labor, equipment and food. In addition, new federal mandates require the district to increase unsubsidized lunches.

“I think we all should have gone into the carrot business,” School Board President Gabe Kolesari said.

District will begin the second phase of upgrades to the district’s physical network infrastructure. Last summer the upgrades began. The second phase will include completion of high school switching replacements and complete switch replacements at Templeton. The plan will include the purchase of hardware that will complete wireless access throughout the secondary schools and the addition of wireless access to elementary schools as needed.

Superintendent Kathleen Cooke, Ph.D., reported to the School Board that online Summer Opportunities registration worked well this year. Registration opened April 13 at 6 p.m., and within the first hour more than 1,000 students were registered for their summer school classes. Registration currently stands at 1,500 students for the popular program that runs from June 20 to July 15.

The school calendar in the past was negotiated between the School Board and the teachers’ association. Due to the state budget situation, no negotiations are occurring. A few key 2011-12 dates are known, however, including the following:

No other dates can be confirmed, but the district will likely use a pattern similar to what has been used in the past to establish dates. When the calendar for 2011-12 can be established, it will be posted on this website and sent to parents.

Christina Garley’s fifth-grade classroom at Maple Avenue Elementary donated $50 to the Make-A-Wish Foundation as part of its Buck a Book program. The reading incentive program encourages students to read on their own time and raise money for a cause they deem important.

For each book students complete and record in their reading log, they bring in $1 or whatever they can from home. Once $50 is collected, the class decides where to donate the money. The class chose the Make-A-Wish Foundation, the nation’s largest wish-granting organization, because it has given hope, strength and joy to children with life-threatening medical conditions. The Foundation grants a child’s wish in the U.S. every 40 minutes.

The Buck a Book program, which runs throughout the school year, encourages Maple Avenue fifth-graders to read while helping others. The donation is the class’ second donation this year. The class donated $50 to the Juvenile Diabetes Research Foundation in January. Since the start of the “Buck a Book” Program in 2006-07, fifth-graders in Garley’s classes have donated $500 to various organizations. Parent feedback regarding the program indicates that it has been successful in motivating students to read.